No matter where you go

I’ve been wondering what the hell to do with this blog – since I so rarely come back to update these days, I feel guilty and obligated, but then I wonder if anyone is actually reading anymore. It comes and goes in cycles, I guess. I like the idea of no-obligation blogging.

I’ve been up to quite a bit in the studio over the past few months as Maia Rainwood Design seems to be taking a bit of a sideways slide into stuff for houses, not just people. I’ve been preparing quite a few light catchers and garden ornaments to help my friend with inventory at her booth at the Southern California Renaissance Faire. 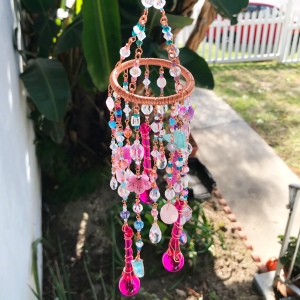 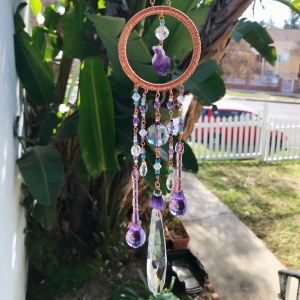 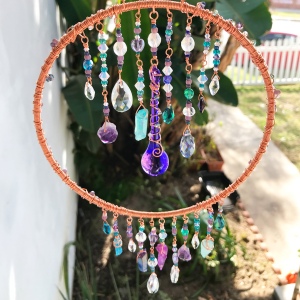 They’re pretty damn spectacular if I do say so myself – a mix of prisms, vintage and new chandelier parts, crystal points, repurposed beads (vintage and new) and odds and ends from various flea markets. I’ve been having a blast making them, they’re pure play and so beautiful in the light. It’s hard not to fill my own windows. I mean, if I were being 100% honest I’d totally fess up to the fact that, I might have actually filled my own windows with light catchers that are NOT being sold. 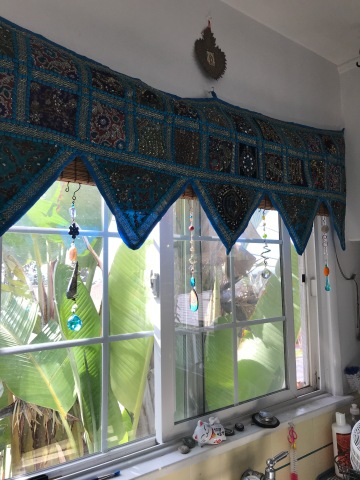 So now, in the morning and at certain points through the day, the kitchen is filled with rainbows and it’s pretty damn marvelous if I do say so myself.

Some of the light catchers are more than a bit over the top. 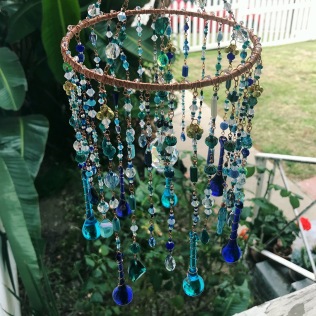 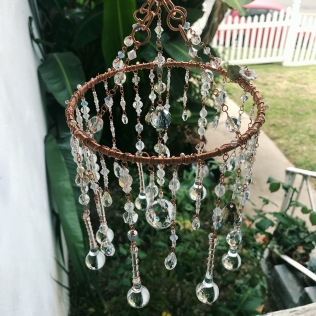 Hopefully someone will want to take the big ones home. Pictures don’t really do them enough justice. I might figure out a way to hang them from a light fixture, can you imagine having one of these beauties hung ’round a light in your bedroom?

Once I’m done sorting things out with the State of California and get my Etsy shop back up and running, I’ll have a bunch of these listed for sale. Till then, you can find them on my work Instagram.

The other thing I’ve been playing around with lately is needlework, specifically embroidery, wool appliqué, and penny rugs. 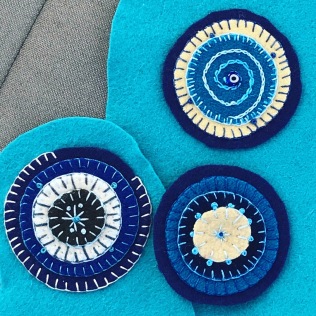 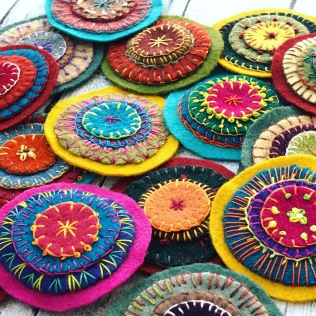 I honestly have no worldly idea what the hell I’m going to do with any of these. Make things I supposed. They’re really fun. SO fun. Embroidery is lovely and wool appliqué is a lot of fun. Looks like folks will be getting something other than knitwear for Christmas this year.

I just had my gallbladder out on Thursday and in the Norco-hazed 3 days between surgery and today, I apparently went and bought some needlepoint, quilting and sachiko embroidery supplies. I have no recollection of this, it’s just that my Pinterest pins have multiplied, I have a lot of emails from Etsy vendors saying, “thanks for the sale”, my bank account is suddenly empty, there’s a hold on my debit card, and packages full of thread and vintage reclaimed fabrics have begun arriving at the house via USPS. I have no recollection of buying ANY of it. But it’s all really great and I totally don’t want to return it now!

Still, in an effort to get some of the money BACK it looks like I’ll be adding some textile arts to the home decor in the shop at some point.

The problem is, I don’t, actually, quilt.

Owner and Maker at Maia Rainwood Design. Wearable art for wise women, birth keepers, witches, and world-builders.
View all posts by Maia Rainwood →
This entry was posted in Uncategorized. Bookmark the permalink.

14 Responses to No matter where you go