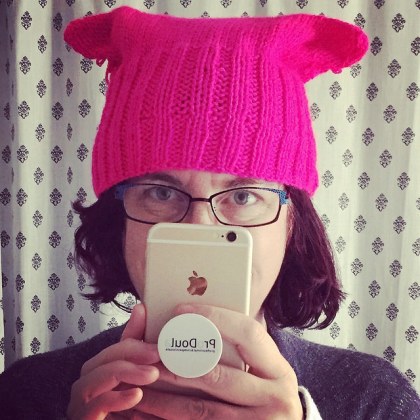 It’s no secret that I’m still struggling with the impending reality of Inauguration Day. With news coming out daily about election hacking, vote machine tampering, and other issues in key states, there’s this part of me that is holding out a tiny thread of hope for Dec. 19th, but honestly…  I don’t think the Avenging League of Hamilton Electors are going to swoop in like Thor and Iron Man and save us from the , er, , er, , what’s coming.

I feel lost, and scared, and part of me wants to put my head down and focus on my own paper and the rest of me feels like that’s how we got ordinary Germans looking the other way as their neighbors were carted off to Auschwitz.

Better just to keep my eyes open and act accordingly, then.

I’m worried about my mom and how she’ll weather the cuts to Social Security and Medicare that Paul Ryan is planning to make.

The list is long and I could go on.

Suffice it to say, I’m worried. I knit when I’m worried.So right now I knit pink hats during TV time, for the Pussyhat Project, to send to Washington DC since I can’t get to the Women’s March in DC. And, I’m making some for the march in Los Angeles on January 21st. I’ll probably have a few extras so if you see me there, hit me up.

Like safety pins, when it comes down to it, making pink hats with kitty ears won’t do a damn thing unless we’re willing to back our symbols up with direct action. So be the person who is willing to take that action. Step up. Help your neighbor. Help a stranger. Collaborate. Strategize. Network locally. Educate yourself. Wake up. Pay attention. Resist. On January 21st, whether it’s in DC or a city near you, march.

And knit. In the very least it’s soothing. Knitting this yarn, which is Caron Simply Soft dyed a rather eye-popping shade of neon pink and acrylic to boot, is not soothing in the slightest. But the act itself, of knitting? Good therapy in uncertain times. And it makes me happy to think that some folks will have hats on march day.