Yet More Fun With Cats

It all started a few weeks ago, during the Twain Harte fair, when Lovebug, Fifth Viscount Naughtypants, the Earl of Angelfluff, Mr. Tinklebritches Esq. III figured out how to get around the patented Grip Security Measures we’d installed on the back screen door. He took several extended romps through the lion and bear infested forest (y’all, there was a black bear just hanging out next to the wood pile two weeks ago), and discovered a lovely system of culverts and pipes under our road. Pipes that a resourceful fellow could duck into in a pinch, say, if a human being were pelting after him trying to forcibly return him to his Indoor Cat state. Done properly, a fellow could then pop up on the other side of the road and make his escape, while the hapless human was still peering fruitlessly into the culvert pipe, calling, “Heeeere kitty kitty….” and shaking a bag of salmon treats. 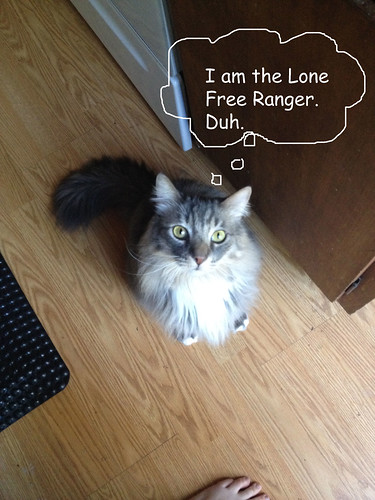 He is the Lone Free Ranger. Who has only ever had Inside Cat shots, because we erroneously believed that he was on board with the Inside Cat idea.

Last week the Lone Free Ranger won an all expenses paid overnight stay in a luxury suite at the cat hospital, where he was diagnosed with asthma. So now he is on steroids. Our rambunctious, bear wrasslin, outside lovin’, take a walk on the wild side, little cat was initially thrilled at the idea of steroids. Visions of bodybuilding stardom danced in his little pea brain, perhaps a walk-on role in an updated barbarian movie was in his future! 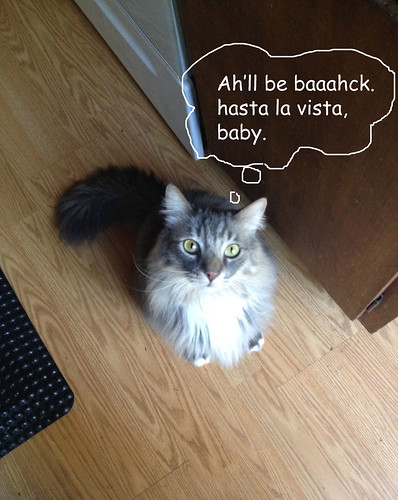 No no. Those are the wrong kind of steroids. You aren’t going to be pumping it up with Hans and Franz any time soon, I’m afraid. These will just puff you up, my little Viennese sausage.

A few days later, he had to go back to the hospital. Indoor Cat meets Outside Virus. We added two more medicines to the regime. This is when I realized that every penny I made in San Jose was going to wind up in my vet’s bank account.

Reality:
1. We are now dosing the cat with meds five times a day.
2.My vet is probably planning an extended trip to Hawaii.
3.I will never be able to afford Hawaii because cats are assholes. 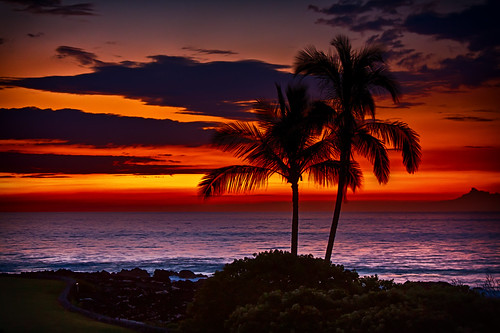 This is Hawaii. WHERE I WILL NEVER GO. (and this is the flickr feed of the person who took this awesome picture)

So I’m curious. Do I look like a rodeo clown? Because wrangling this cat feels kind of like what I imagine I would feel like if I were a rodeo clown.

When he hears me open the fridge to get his meds out, he quickly leaps up to the top shelf of the cat tree and turns on the Death Ray Glare. Our cat tree is +6’ and I am only 5’7”. You may be starting to see a problem here. 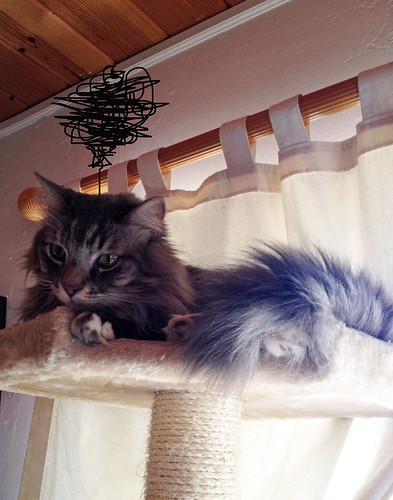 As I go look for a stepladder, he sinks his claws into the living room curtains and hangs on for dear life. Once the cat has successfully been extricated from curtains and cat tree, it takes three of us to actually get the meds into him.  Last night the cat figured out how to spit his medicine across the living room. This morning he one upped that feat, made an alarming noise, spit his meds out in my face, clawed his way free and leapt to the top of the cat tree in a matter of seconds. There he sat, daring us to wrangle him down for a second time. There’s a point in every battle where someone says, “fuck it. You win.” Well I didn’t actually say, “Fuck it, you win.” No. I was trying to get prednisone out of my eye. But I thought it.

The cat has since informed me that I am violating his human rights. I will be hearing from his attorney and that also, he called the UN. I told him that the UN is busy and to get off the damn cat tree, it’s time for his dewormer. I haven’t had the guts to tell him that after his antibiotics run out, the vet will be jabbing him in the arse with Outside Cat shots. I’ll let her explain that one. She just got back from Hawaii after all. She’s nicely tanned and not covered in scratches and prednisone. Fresh. Yeah. That’s it. 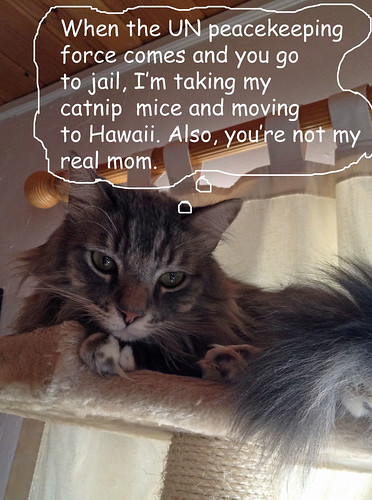 Owner and Maker at Maia Rainwood Design. Wearable art for wise women, birth keepers, witches, and world-builders.
View all posts by Maia Rainwood →
This entry was posted in cats, Chasing Cats With Socks, Family Life, In The Mountains and tagged cats, cats are assholes, hawaii, why we can't have nice things. Bookmark the permalink.

9 Responses to Yet More Fun With Cats