There’s something happening here, out by the back deck at Spacious Nuthouse Estates. Captain Sexypants is doing interesting things with wood and muttering about lag bolts. But whatever could he be up to? 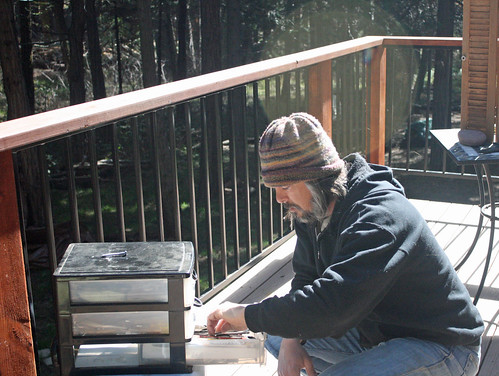 Well, he’s building a “Medieval Market Stall” that’s what he’s up to. We are doing a bunch of Renaissance, fantasy and pirate Faires this year and some of them have fairly strict rules about what vendor booths can look like. Our faithful EZ Up just won’t cut it. Buying a small marquee style faire pavilion runs between 2 and 3k, and that’s money that I just don’t have so we’re building ourselves something cheaper. And by “we are building” I mean, “Captain Sexypants is building.” although I am occasionally doing helpful things like coming out to say “yes” or “no” to some detail or another.

Sometimes the best way you can help is to not actually help.

We are using this as our reference photo.

Now you may have noticed I said “reference photo” not “clear directions with measurements and math.” That is because the chap who built this did not actually provide clear instructions or measurements. No. His whole attitude seems to be one of “Drool over this awesome structure that I built. Oh yes, admire and weep while I laugh because exactly how I did it is a SEEKRUT, suckers.” Caveat: I actually don’t know about his attitude, I’m guessing, based on the lack of clear instructions with the picture, and my own sense of the dramatic. He’s probably a perfectly swell guy who shares and donates to orphans and probably he just forgot to put up a .pdf file of exactly how he built that awesome market stall. Perhaps he had a veterinary emergency. Perhaps his internet went out. We will probably never know.

Regardless, the lack of data is problematic.

After some intense discussion (read: heavy sighing and facepalming and a whole lot of muttering) it was decided that no, I want it, and the Captain would be reverse engineering the whole thing from that one picture.

It’s good to keep your brain active, especially in middle age. Things slow down. You need stuff like yoga, Sudoku and crossword puzzles at our age. You have to keep the brain nimble. I’m doing us both a huge favor with this. Really. This project is exactly like ginko biloba, but, with more swearing. 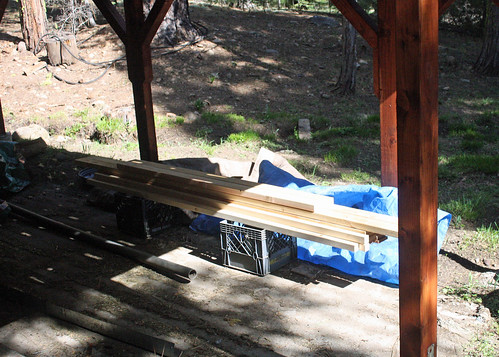 The Captain wanted me to tell you that in addition to math, he had to clean out the space under the back deck before any of this could be done. There was straw and detritus from the deck build still under there, stuff that had filled up with rainwater, plus all the mud and dirt and piles.

And spiders. Spiders the size of cows.

He says that in light of the spiders, he deserves steak and a craft beer for dinner. Who am I to argue? I like steak and craft beer. Win win! 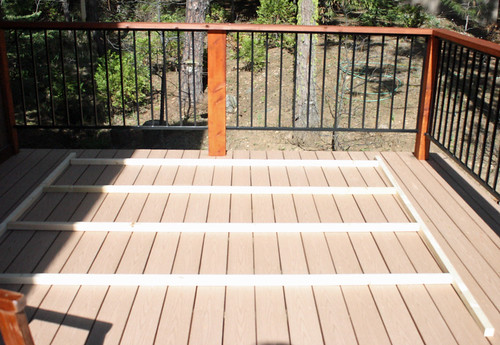 We have the angle on the side supports figured out and the back portion laid out now. 8 feet tall by 8 feet wide. This will give us 2 feet of clearance. Even freakishly tall customers will not have to duck their heads. It will be the exact opposite of feeling trapped like rats.

The whole thing has to be engineered to break down and come together easily. Those back posts will be carefully drilled and then we’re doing something complex with lag bolts and sleeves. Don’t ask. I can’t explain, and we all know what “we” really means.

Once it’s all drilled and we know how to put it all together and take it apart, I’ll be able to get out there with the rotary sander and some dark brown wood stain. I may be afraid of spiders and the table saw*, but I can wield a paintbrush like nobody’s business and as we learned at Crafted, that rotary sander is totally my bitch. 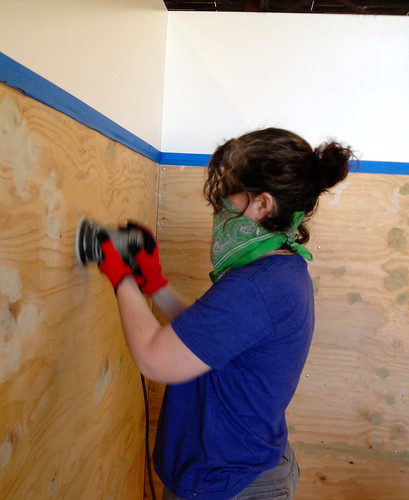 I’ll even make the Captain a pina colada with a little umbrella and he can hang out on the deck and relax while the sanding is going on.

*About that table saw. My dad had a wood-shop when I was growing up and the rule was that I had to run over to the shop steps and sit very quietly with my hands in my lap whenever he lit up a power tool. So now, years later, whenever the Captain fires up that #!#@ table saw, I have this overwhelming urge to sit on the stairs with my hands in my lap and be VERY QUIET until he is done.

Oh, and Dad did SUCH a great job with impressing the idea that YOU DO NOT TOUCH THE TABLE SAW EVER EVER EVER BECAUSE IT IS RABID AND HAS TEETH AND WILL KEEEEELL YOU upon me forty-mumble years ago, that now I can’t even go near the damn thing. Not even when it’s turned off. Just walking past it gives me palpitations and a sense of clear and present danger.

5 Responses to Market stall? We’ve got your market stall.